c) Calculate the equivalent radius of the resisting section of 20 cmthick slab, given that
the radius of the contact area wheel load is 12cm. (5M)

Q. 2) a) What are the significant recommendations of the Jayakar committee report? Explain how it is implemented in the road development of a country. Name some the ongoing project around your vicinity in brief. (10M)

Q. 3) a) Design the flexible pavement using the IRC 37:2001, for highway expansion of four-lane having an initial traffic of 3784, rate of growth 5%, VDF= 3.5, CBR is 5%, the construction period is 2 years and design life is 15 years. Use the design chart provided to read the thickness. Also, Explain the two critical failures that are in-cooperated while designing the pavement using IRC 37:2001.(10M)

Q. 4) a) Design Superelevation at a horizontal curve of radius 300m for speed of 65 kmph.Assume suitable data and justify your answer. (10M)

b) Calculate extra width of pavement required on a horizontal curve of radius 700m on a two-lane highway, Design speed being 80kmph. Assume l=6m.

b) Explain the stage wise construction of Bituminous Macadam. (5M)

c) What are the advantages of geo-synthetics in highway construction. (5M)

Q. 5) a) While conducting BBD studies the initial dial gauge reading and intermediate reading and final reading obtained at three deflection observations points A, B, and C are given below. If the least count of the dial gauge reading is 0.01mm and the value of K of the Benkelman beam is 2.91, determine the rebound deflection values at the three points. Point A: 0, 46, 44, Point B: 0, 33, 29 and Point C: 05, 60, 59. For the same also determine the mean deflection, standard deviation, and characteristic deflection for heavy traffic. (10M)

b) How important it is to conduct the basic testing of bitumen and why? Explain the test that is conducted to identify the grade of the bitumen. Suggest some of the grades that are suitable for using in higher temperature regions (10M)

Q. 6) a) To identify the location of congestion, causes and to reduce delays and increase the travel speed, which Traffic Engineering study is conducted? Name the study, discuss the objective, and briefly explain one of the methods of conducting the study and the data collected in the conduction of the study. (8M)

b) Express the relation between traffic volume, density, and speed? If Vsf is the free mean speed to be 80 kmph and if jam density Kj is 145 vehicles /hour. Compute the maximum capacity flow? (6M)

c) Explain in detail the general concept of level of service with a figure. (6M) 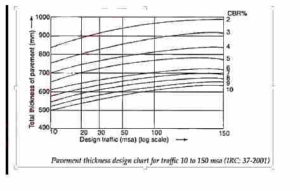 Back to Course
Next Lesson
Scroll to Top

Login
Accessing this course requires a login. Please enter your credentials below!
Lost Your Password?